With luminous insight and fervent prose, Andre Perry’s debut collection of essays, Some of Us Are Very Hungry Now, travels from Washington DC to Iowa City to Hong Kong in search of both individual and national identity. While displaying tenderness and a disarming honesty, Perry catalogs racial degradations committed on the campuses of elite universities and liberal bastions like San Francisco while coming of age in America.

The essays in Some of Us Are Very Hungry Now take the form of personal reflections, multiple choice questions, screenplays, and imagined talk-show conversations, while traversing the daily minefields of childhood schoolyards and Midwestern dive bars. The impressions of Perry’s personal journey are arresting and beguiling, while announcing the author’s arrival as a formidable American voice. 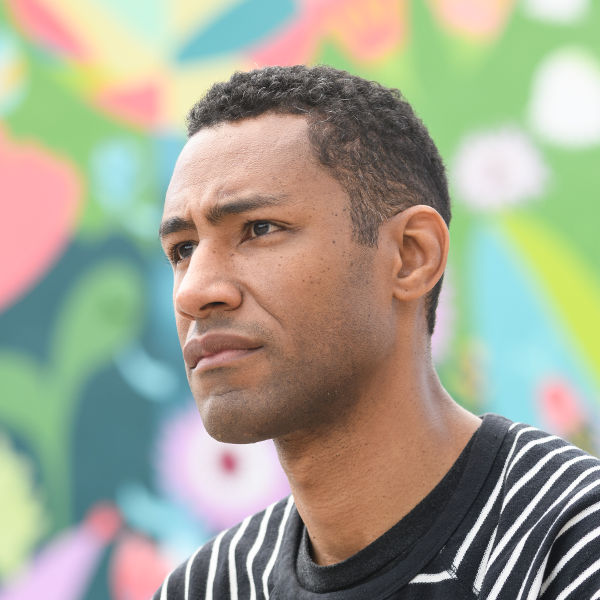 Andre is a writer whose work combines elements of memoir, cultural criticism, and playful experimentation. His essays and stories reflect, without apology, the painful and hopeful intersections of class, gender, and race in our contemporary world.

He received his MFA from the Nonfiction Writing Program at the University of Iowa. His writing has appeared in The Believer, Catapult, Granta, and many other publications. His book, Some of Us Are Very Hungry Now, debuted on November 12, 2019 via publisher Two Dollar Radio. He frequently hosts readings, talks, and discussions and is at work on his next book.

“A complete, deep, satisfying read… The variety of structures, formats, and rhythms Perry uses in Some of Us Are Very Hungry Now is extraordinary… These essays shine with broken humanity and announce the arrival of a new voice in contemporary nonfiction, but they do so with heaps of melancholia and frustration instead of answers. That Perry can hurt us and keep us asking for more is a testament to his talent as a storyteller.”

“An interrogation of language, pop culture, society, and the self, Andre Perry’s essay collection Some of Us Are Very Hungry Now dissects uncomfortable truths and universalities… With his frank, empathetic tone and no-nonsense prose, Andre Perry is a fresh American voice that demands to be heard.”

“Beautiful, brilliant, bold…Tantamount to a slice from the Americana songbook. These essays are ballads, images from the self, isolated and marginalized in other countries and in his own land. These are songs of identity and sexuality and expectations the world has of African American males from those perspectives. Here’s hoping this book will mark the start of a long and varied journey for Perry. If the goal of a literary traveler is to show how connected we are to one another, his debut collection is an assured indication of deeper glories yet to come.”

“The gift of Some of Us Are Very Hungry Now is in its brilliant and lyrical meandering. Andre Perry is a generous writer—one who is unafraid of the vulnerability that exists in inviting readers into a world that questions place and belonging. This book is essential, for how it asks with no expectation of answer.”

— Hanif Abdurraqib, author of Go Ahead in the Rain

“Andre Perry’s writing is utterly alive, scene-setting, visceral, candid and punk. Perry’s prose is transporting in this vivid experimental memoir, tackling gentrification, music, sexuality and the mutability of identity. Perry takes the reader along as he travels the world and untangles who he is from particular American racist mythologies. A remarkable debut.”

“In this complex and compelling collection, Andre Perry holds his focus on all who seek to anonymize his sensitive and singular voice. His unwavering critical eye is attended by a kind of heartsick self-awareness; while he might pull a few punches from those who deserve it, he never spares himself.”